It is with extreme sadness that we mourn, together with colleagues around the world, the passing today of the great cultural theorist and activist Professor Stuart Hall. 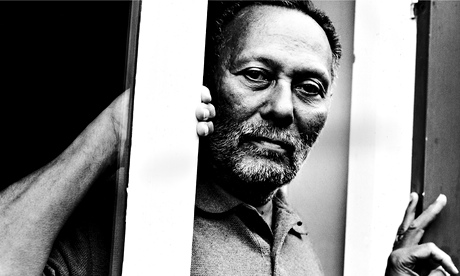 Professor Stuart Hall’s influence has been enormous, even for those of us who were not fortunate enough to count him as a friend or colleague.

His huge outreach as a cutting-edge critical theoretician and as a fearless social activist has been felt around the world for more than half-a-century, making him the exemplary embodiment of the modern organic intellectual.

He persuaded many by means of his deeply rooted political commitment and immense erudition, but still many more by a personal charisma which won us immediately over by the sheer radiance of smiles and humour.

He was a highly personable educator who in addition to his forceful and compelling writings so fondly introduced us to his native Jamaica and the wider Caribbean in the television series Redemption Song, or freely shared his love of music in radio’s Desert Island Discs.

It is perhaps for this unique combination of theory and practice, of intellect and emotion, that Professor Hall will be remembered as a major contributor to academic and social life in Britain and the wider world.

The opening event of FILM AND MEDIA 2014, planned in happier times in Autumn 2013, will be a screening of John Akomfrah's film tribute, The Stuart Hall Project.

The screening will be followed by our first Keynote Address, 'Stranger in a Strange Land', to be delivered by US Cultural Studies pioneer Professor Larry Grossberg (University of North Carolina at Chapel Hill, and former CCCS postgraduate student).

When Richard Hoggart founded the Centre for Contemporary Cultural Studies at Birmingham University in 1964, he invited Stuart Hall, who has died aged 82, to join him as its first research fellow. Four years later Hall became acting director and, in 1972, director. Cultural studies was then a minority pursuit: half a century on it is everywhere, generating a wealth of significant work even if, in its institutionalised form, it can include intellectual positions that Hall could never endorse.

The foundations of cultural studies lay in an insistence on taking popular, low-status cultural forms seriously and tracing the interweaving threads of culture, power and politics. Its interdisciplinary perspectives drew on literary theory, linguistics and cultural anthropology in order to analyse subjects as diverse as youth sub-cultures, popular media and gendered and ethnic identities – thus creating something of a model, for example, for the Guardian's own G2 section.

Hall was always among the first to identify key questions of the age, and routinely sceptical about easy answers. A spellbinding orator and a teacher of enormous influence, he never indulged in academic point-scoring. Hall's political imagination combined vitality and subtlety; in the field of ideas he was tough, ready to combat positions he believed to be politically dangerous. Yet he was unfailingly courteous, generous towards students, activists, artists, and visitors from across the globe, many of whom came to love him. Hall won accolades from universities worldwide, despite never thinking of himself as a scholar. Universities offered him a base from which he could teach – a source of great pleasure for him – and collaborate with others in public debate.

He was born in Kingston, into an aspiring Jamaican family. His father, Herman, was the first non-white person to hold a senior position – chief accountant – with United Fruit in Jamaica. Jessie, his formidable mother, had white forebears and identified with the ethos of an imaginary, distant Britain. Hall received a classical English education at Jamaica College in Kingston – while allying himself with the struggle for independence from colonial rule.

But he found the country's racial and colonial restrictions intolerable and an escape presented itself when he won a Rhodes scholarship to study at Oxford University. He arrived in Britain in 1951, part of the large-scale Caribbean migration that had begun symbolically with the arrival of the Empire Windrush three years earlier. Hall recalled that when he took the train from Bristol to Paddington station in London, he saw a landscape familiar to him from the novels of Thomas Hardy.

However, if Britain was a culture he knew from the inside, it was also one he never entirely felt part of, always imagining himself a "familiar stranger". At Merton College, studying English, he experienced this sense of displacement, his enthusiasms – for a new politics, for bebop, for a world alive to the values of human difference – incomprehensible to the cavalry-twilled former public schoolboys who surrounded him.

As his time in Britain lengthened, so his identifications with blackness deepened. Ambivalent about his relation both to his place of departure and to his place of arrival, he sought to survive the medieval gloom of Oxford by making common cause with the city's displaced migrant minority. Out of these new attachments, and out of the political cataclysm of 1956 – marked by the Anglo-French-Israeli invasion of Egypt and by the Soviet suppression of the Hungarian revolution – emerged the new left, in which Hall was an influential figure: it provided him with a political home. At this point he found himself "dragged backwards into Marxism, against the tanks in Budapest" – and, if his Marxism came "without guarantees", it was nonetheless a vital part of him to the end.

In 1957 these issues became the catalyst for the launching of the Universities and Left Review, in which Hall was an active presence, and which subsequently merged with the New Reasoner to form the New Left Review, of which Hall was the founding editor. Abandoning his thesis on Henry James, he moved to London. By day he worked as a supply teacher in Brixton and, late into the night, on the Soho-based NLR. In 1961, he became a lecturer in film and media at Chelsea College, London University. Brixton and Soho had proved congenial to him where Oxford had not, and he began his work on popular culture. The Popular Arts (1964), co-authored with Paddy Whannel, opened a field of inquiry he was to develop at Birmingham.

On the 1964 Campaign for Nuclear Disarmament march from Aldermaston to London, Hall met Catherine Barrett, and they married later that year. With his appointment to the CCCS they moved to Birmingham where their two children, a daughter, Becky, and son, Jess, were born, and where they lived until 1979. During these years Catherine became an acclaimed historian, and the marriage proved to be a source of great mutual love and support. Their homes, in Birmingham and then in London, were welcoming places, drawing in their many friends.

In Birmingham, under Hall's charismatic leadership – and on a shoestring budget – cultural studies took off. But as Hoggart remarked, Hall rarely used the first person singular, preferring to speak of the collaborative aspects of the work. His energy was prodigious, and he shifted the terms of debate on the media, deviancy, race, politics, Marxism and critical theory.

While there are no single-authored, scholarly monographs to his name, Hall produced an astonishing array of collectively written and edited volumes, essays and journalism – translated into many languages – as well as countless political speeches, and radio and television talks.

In 1979 he became professor of sociology at the Open University, attracted by the possibility of reaching out to those who had fallen through the conventional educational system. He remained there until 1998 – later becoming emeritus professor – launching a series of courses in communications and sociology. Increasingly, he focused on questions of race and postcolonialism, and on theorising the migrant view of Britain that he had always cherished.

The move to the OU coincided with the election victory of Margaret Thatcher. Before the election, Hall, convinced that the emergence of this new Conservatism marked a profound cleavage in British political history, coined the term Thatcherism, in a visionary article in Marxism Today. Drawing both on his long involvement with Antonio Gramsci's theorisation of the forms of political hegemony and on the collaborative CCCS volume Policing the Crisis (1978), he emphasised the role of race in Thatcherite politics, particularly in relation to the creed of law and order which he characterised as "authoritarian populism".

In The Politics of Thatcherism (1983), he insisted that the left's traditional statism was in part responsible for creating the conditions that had allowed the Thatcherites to win ascendancy, pointing to the degree to which Thatcherism had rooted itself in authentically popular sentiment – something he believed the left had failed to do. This generated fierce controversy among those who might otherwise have been among his political allies. His conviction that Thatcherism would define the politically possible, long after Thatcher herself had departed, proved enormously prescient, providing a key to understanding the politics not only of New Labour, but also of the subsequent coalition.

Hall, a campaigner for racial justice, was invited to join many official, and unofficial, public bodies. From 1997 to 2000 he served on the Runnymede Commission on the Future of Multi-Ethnic Britain, and was shocked by the media reaction to the commission's observation that the idea of Britain itself was racially far from innocent. He knew that the persistence of race thinking ran deep among the British.

He enjoyed university life but was relieved to relinquish his full-time academic role. This presented him with another opportunity to reinvent himself, by then in alliance with young artists and film-makers, exploring the politics of black subjectivity. A new Hall emerged, evident in catalogue introductions and workshop discussions in galleries in Britain and across Europe.

Once again he collaborated with – and learned from – people considerably younger than himself, chairing Autograph (the Association of Black Photographers) and the International Institute of Visual Arts. He was proud that he helped secure funding for Rivington Place, in Hoxton, east London, a location dedicated to public education in multicultural issues, drawing from contemporary art and photography. His involvement in the movement for black arts gave him a new lease of intellectual life. This Stuart Hall was reflected in the history of his life and work produced in 2013 by the film-maker John Akomfrah, in the form of a much lauded gallery installation, The Unfinished Conversation, and in a widely distributed film, The Stuart Hall Project, which brought Hall to the attention of a new generation.

Latterly Hall's health, always more precarious than he let on, declined; he had to face intensive dialysis and later, at an advanced age, a kidney transplant. This ate up his time and energy, gradually constraining his mobility and his ability to take part in public life. But to the end, he held court at home to an endless stream of visitors keen to discuss the politics of contemporary times.

During the period of the New Labour government he became increasingly furious that managerialism was hollowing out public life, and increasingly pessimistic about the global situation. Yet he was cheered that "someone with Hussein for a middle name" was sitting in the White House and, after the 2008-09 credit crunch, was mesmerised by the sight of market capitalism falling apart of its own accord. Throughout, he remained optimistic, and as late as last year he and his colleagues on Soundings magazine were producing manifestos for a post-neoliberal politics.

In 2005 he was made a fellow of the British Academy. His published work includes the collaborative volumes Resistance through Rituals (1975); Culture, Media, Language (1980); Politics and Ideology (1986); The Hard Road to Renewal (1988);New Times (1989); Critical Dialogues in Cultural Studies (1996); and Different: A Historical Context - Contemporary Photography and Black Identity (2001). All these works testify to the breadth of Hall's intellectual engagements, and to the ways he moved through the various new times of his own life.

When he appeared on Desert Island Discs, Hall talked about his lifelong passion for Miles Davis. He explained that the music represented for him "the sound of what cannot be". What was his own intellectual life but the striving, against all odds, to make "what cannot be" alive in the imagination?

He is survived by Catherine, Becky and Jess, by his grandchildren, Noah and Ishaan, and by his sister Patricia.